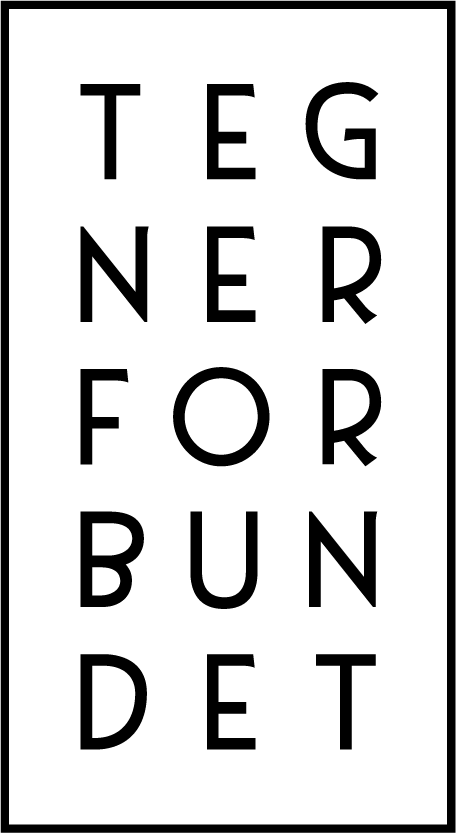 Artist of the Month : Torgeir Husevaag

Torgeir Husevaag (1967) works with detailed and carefully planned drawings. They are made with precision based on rules and repetitive principles. "Errors" that occur in the inherent inaccuracy of the hand will not be erased or reversed, rather they will be incorporated as an essential part of the work of art's emergence. Husevaag's work appears as abstract, but the artist is based on something tangible and concrete that is the subject of an analyzing and exploratory process. The drawing grows into pulsating shapes and forms the impression of something living and organic. This approach results in a sensual and tactile expression. Husevaag has a degree from the Statens Kunstakademi in Oslo and the Winchester School of Art. Behind him he has a long list of exhibition activities, both domestically and abroad. He has been purchased by, among others, Art in the Workplace and the National Museum.

TF: Torgeir, can you tell us a little about your artistic work?

I have worked as an artist since I graduated from the Academy in Oslo in 2000, with exhibitions, some decorations and occasional book projects (artist books). I have a studio in Oslo, and work mostly from here. My art has an exploratory character. In general, drawing and writing is my comfort zone, but sometimes I also work three-dimensionally or spatially, and have been to both performance and video. Many of my drawings are generative or rule-based, a form of game. These works are usually serial, with emphasis on the relationship between variation and repetition. I can work for several years on one project, exploring variations of a theme, until it feels exhausted or I need a different approach. Over time, narrative projects with figurative illustrations have become more important to me. Lately, I have been working on these narrative works in a kind of editing film with a narrator's voice. This direction hopes to be developed further in the future.

TF: How do you use drawing in your work? Tell us a little about your work process.

I can not use drawing as a quick and spontaneous idea development tool. I like the opposite - working with slow, almost meditative, and really quite locked processes. I always do several things at once, so that I have several workstations in the studio. Then I can switch between maybe 4-6 parallel things. A couple of them are drawings, the rest are other tasks. On a typical day, I might first work a little on a generative drawing, then a little on an illustrative, then on something completely different, etc.… eventually I come back to the first drawing again. This is how many days go by, probably weeks, before one work is finished, and I get plenty of time to follow the development, imagine the finished result, and look forward to seeing if it turns out as I think. At the same time, I look for qualities in the unfinished stages along the way, which I can try to facilitate to cultivate in later drawings. When I work with generative drawings, the rules are predetermined, and I have in a way divided myself in two. My thinking I makes the plan, my executive I implements it. Thus, I can draw my way without constantly having to make aesthetic decisions. I get paralyzed by having to make too many decisions. Still, there may be some room for change along the way: I can make new rules or make adjustments and additions, as long as it does not affect the parts that have already been done. When a job is finished, I have to consider whether the result has any value, then. Whether it is visually stimulating, in one way or another. If I work serially, not every drawing must be "good" in itself, then it is the whole and the interaction between the parts that counts.

Drawing can otherwise be both a goal in itself and a means, in the sense that it is an element in a larger whole.

When I work with figurative drawings, it is more like a means, in interaction with eg text. Here I often work after photos and use light tables. It is a different work process, with different objectives, but it is also quite mechanical.

‍ TF: What inspires you? Do you work from a theme?

Inspiration is more whimsical than my methodical way of working. I am often fascinated by a small detail in something: a strange wording, a way of drawing a line, a strange map section, a siding in a personal story. Then I start collecting, mapping and organizing, drawing and writing. One can take the other, it can take a few years…

However, there is something underlying. I have probably always been most fascinated by drawing that is close to language, where each dot or line or shade is a sign that has a specific meaning. Typical maps and other infographics. The combination of information, language, patterns, connecting lines and the game of chance exists in everything I do, but can appear in many disguises. They are both present in the biographical works I am doing now, which deal with the life of my father, before and after he got Alzheimer's, and in previous projects based on e.g. (card game) poker or facets of climate change. And although I am concerned with each topic as specific fields or spheres, these underlying structures must also be present.

I am of course inspired by other artists, and get a lot out of Sol LeWitt, Ilya Kabakov, Mark Lombardi, Jorinde Voigt, or just flipping through the latest issue of Fukt magazine. Non-art can be just as interesting - Florence Nightingale's analytical pie charts from the Crimean War, for example, are both fascinating in form and content.

I am working towards an exhibition in Trondheim Kunstforening. The main emphasis of it will consist of generative works. I make a series of new drawings, based on simplified compass roses.

I'm also working on a movie. When I exhibited at Kunstplass [Oslo] last year, I had two short films called Prologue and Epilogue to Junaiten. It was a kind of fluid montage film about how Alzheimer's took from my father the things that meant the most to him - in his own words. They are part of Østlandsutstillingen, which opens on 2 April. Now I work with the "missing" part in between, the "Junaite" itself, which is more about how a life story is constructed. It will be made in the same style, where drawing, posters, photos and the narrator's voice are mixed into a kind of poetic biography. For the film, I draw the 95 photos in a photo album, the same size as the paper copies. Here the drawings are props for the film, but I think they have an intrinsic value as well, so they will probably become an album afterwards, ie an artist book in one copy.

TF: What does drawing mean for you / your work?

It's a kind of constant, something I always fall back on - whether I want to or not. Because I really think it's a good ideal for an artist not to be bound by one material or medium, but I'm probably a little too hung up on patterns, shadings, gradations, laverings, contour lines and everything else that characterizes drawing, to be able to live up to it.

"Reproduction" was a generative series of drawings, in which small algorithm changes through 61 individual works created a cycle of dissolution and recovery. Apart from an external form, a circle, these drawings have no external references - in that sense they visualize "only" the conditions for their own creation. But they can of course evoke associations.

I have drawn them with a split pen and felt-tip pen. Small gestures or strokes are repeated after a table with different "risk levels" to make "mistakes". When such errors / inaccuracies occur, they are amplified, a bit like a chain reaction. The reproductive series was drawn in two phases. The first was strict and minimalist. Then I made an animated film based on the drawings. Then I continued the drawings - added a kind of analysis of the phenomena that occurred in the first phase - holes, growths and other disturbances. The first phase was just about the serial, the second phase was about working with each drawing as a single work.

The planned compass rose series has a discreet connection to the project about my father's Alzheimer's disease. He was an orienteering runner all his life, but in the end he lost his sense of direction and got lost. The compass roses will also be dissolved.

See works by Torgeir Husevaag in the online store. 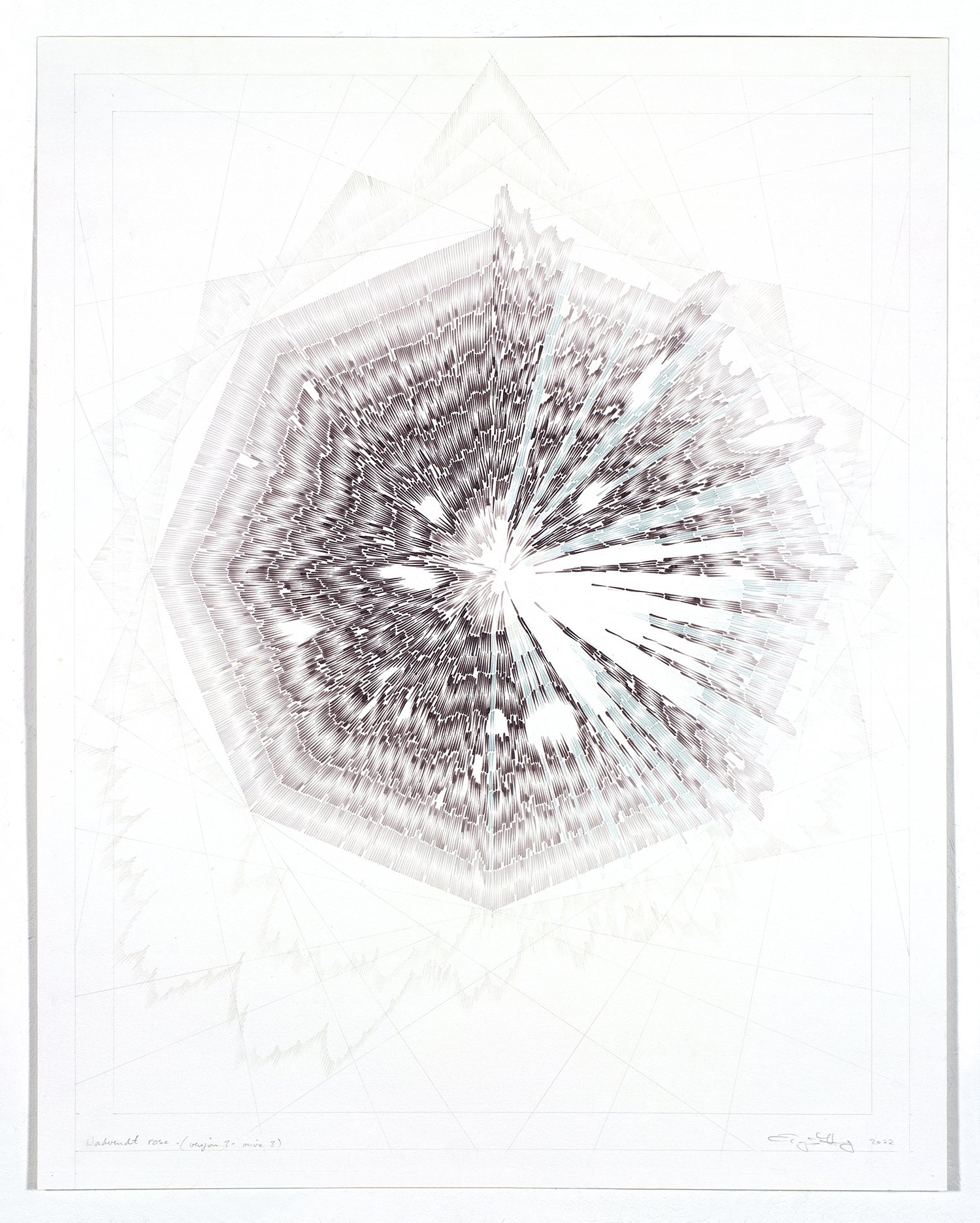